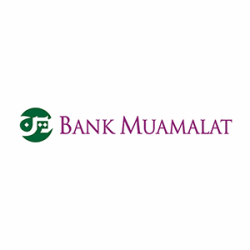 The first financial institution to offer Shariah banking in Indonesia.

PT. Bank Muamalat Indonesia, Tbk (BMI) had established since November 1, 1991 (24 Rabiul Akhir 1412H) under the endorsement of the Indonesia Council of Ulemas (MUI) and the government of Indonesia. BMI commenced its operation in May 1, 1992 (27 Syawal 1412H).

Despite the Asian Financial crisis which hit the banking industry in Indonesia. BMI has proven its resilience and continue to grow. BMI had effectively attracted foreign investors namely Islamic Development Bank, Boubyan Bank, Atwill Holdings Limited, National Bank of Kuwait to become major stakeholders of the bank. BMI continues to grow, in term of asset and its presence in Indonesia. As at December 2016, total asset stood at 55.7 trillion Rupiah equivalent to USD 4.1 billion.

BMI has extensive coverage in Indonesia vide more than 325 networks of branches, sub branches, cash offices and mobile branches all over Indonesia. It also becomes the first and the only Indonesian Bank that has an office in Kuala Lumpur, Malaysia. As the shariah banking pioneer, BMI has genuine commitment to deliver competitive and accessible shariah banking services for the community.

In 2009, BMI established its first international branch in Kuala Lumpur, Malaysia. It becomes the first bank from Indonesia to operate as a branch under International Islamic Banking (IIB) licence awarded by Bank Negara Malaysia (BNM). The branch offers a wide range of products and services to cater corporate and retail customers.

Cross border networking – In addition to the Malaysian market, we also have better understanding on the Indonesian market. We can also leverage on our strong and reputable shareholders. We support the convergence of Islamic banking practices in both countries. Our banking operation is online between Indonesia and Malaysia, giving fast, efficient and real time transaction services.