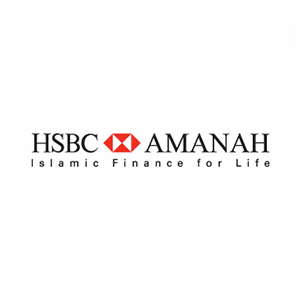 HSBC has been offering Islamic financial services in Malaysia since 1994. HSBC introduced Islamic banking globally in 1998. In 2004, the HSBC Amanah brand was launched globally with the aim of making HSBC the leading provider of Islamic banking

HSBC's presence in Malaysia dates back to 1884 when the Hongkong and Shanghai Banking Corporation Limited established its first office in the country, on the island of Penang, with permission to issue currency notes. In 1959 it bought the Mercantile Bank, which started operations in Malaysia in 1860.

HSBC opened its office in Malacca in 1909 and by the end of 1912, offices had opened in Ipoh, Kuala Lumpur, Johor Bahru and Kota Bharu.

In Sabah, the first branch opened in Kota Kinabalu in 1947. Branches were set up in Sandakan and Tawau a year later, followed by Labuan in 1957. In Sarawak, branches opened in Kuching in 1958 and 1964 and in Sibu in 1959. In 2006, HSBC was the first foreign bank to be awarded a licence to operate a Takaful (Islamic insurance) business in Malaysia. HSBC Amanah Takaful (Malaysia) Sdn Bhd - a joint venture between HSBC Insurance (Asia-Pacific) Holdings Limited (49 per cent shareholding), Jerneh Asia Berhad (31 per cent shareholding) and Employees Provident Fund Board of Malaysia (20 per cent shareholding) - commenced operations in August 2006.

In March 2019, HSBC exited the Takaful manufacturing business to focus on its banking and wealth operations in Malaysia.

HSBC Amanah has the largest and most comprehensive Islamic proposition of any international bank in Malaysia. HSBC Amanah offers International Currency Business Unit (“ICBU”) and cross-border financing to Malaysian and international Corporates and Islamic FIs. Our Shariah-compliant solutions for corporates and FIs include financing, trade and receivables financing, liquidity and cash management, debt capital markets, treasury and risk management solutions.

HSBCnet has Malaysia's first security technology, Virtual Keyboard, and HSBC customers were among the earliest to use online cheque-image enquiry technology.

Customers of HSBC Bank Malaysia were also the first to benefit from account updates via text messages and since September 2000, customers have been able to trade shares listed on Bursa Malaysia online with selected stockbroking companies. In July 2001, HSBC launched ChequeScan to make deposits faster and simpler.

In 2020, HSBC Malaysia became the first bank in Malaysia to launch a digital account opening journey with 24/7 Self-Service Machine for identification and verification process.